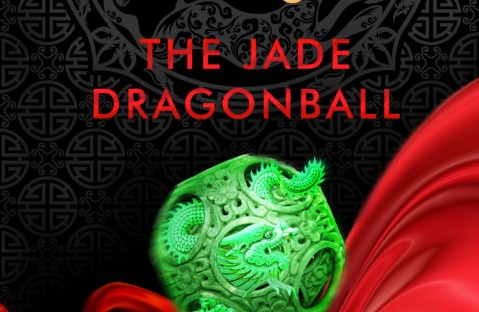 Part two of The Three Hares Trilogy by Scott Lauder and David Ross was released in May 2021. Set in the modern day USA, this quest fantasy series plunges us back in time, first to ancient China in book one, and then to travel along the Silk Road in book two, mixing worlds together with magic and a mysterious quest. I spoke to authors Scott Lauder and David Ross about the series.

Hi Scott and David, thank you so much for agreeing to talk to me about the Three Hares Trilogy. Could you tell us a bit about the books? What is the inspiration behind the story and had you always planned to publish it as a three-part series?

Scott: The books are historical fantasy adventures, which is quite a mouthful, I know. Once we had a firm grasp of the general trajectory of the books – the Three Hares completing their individual tasks, the Three Hares meeting, the Three Hares defeating an evil shaman and a gang boss – it was clear that one book would not be enough and that a trilogy best fitted the scope and theme.

David: Scott invited me onto this project after a discussion he had with Archna Sharma [publisher at Neem Tree Press]. The initial spark for the series was a question they raised: What would happen if a person could enter a work of art? Archna already had a painting in mind – the Qingming Scroll, a beautiful 12th century silk painting depicting a Spring festival in China. It’s a dramatic narrative unto itself! Once we began working on it, we saw possibilities connecting the story inside the artwork with the lives of the characters outside. I’ve been to China a number of times and am familiar with Chinese culture and mythology, but our research turned up so many interesting concepts and details to integrate. We got excited as the adventure began to take shape, so much so that our vision for the book expanded. What if other teens entered other artworks? What if they were being guided to help them stop a plot that endangered them in the real world? What if …?

Scott: When I met Archna Sharma ages ago in Dubai at the very start of the project, I was immediately enthused by what she proposed. It was an intriguing puzzle: how to create an exciting, fictional series of books that would attract and entertain younger readers but also encourage them delve into different cultures and historical periods. I found the three hares symbol, the oldest known one is in the Mogao cave complex in China, while searching for a unifying theme for the books. Hopefully, the stories and the symbol will inspire younger readers to find out more about other cultures, periods in history, countries. If it does, I’ll be delighted: there is so much in the books that could be explored further: China, the Silk Road, Constantinople, the terracotta warriors, and the history of silk to name a few.

Claire: I’ve read from your online biographies that you have both travelled extensively. Could you tell us a little about your experiences and how much of an impact your travels have had on your writing?

Scott: David is more familiar than me with China having worked there, but we both have experience of living and working in Asia. In fact, it was as English teachers working in Japan that we first met. One of the great joys I have as a traveller is reading up on the history of a country or city before I visit it. Istanbul is a classic example. It was amazing to read about the history of this great city and then walk its streets, see its walls, stand beside its ancient monuments, enter its palaces. And it was a delight when I figured out how I could incorporate Constantinople, as it was then, into Sanjeev’s story.

David: I’ve been fascinated by Asia for a long time. Scott and I actually met in Japan about 30 years ago, where we both teaching English. We lost track of one another for a while after that, and it was a real delight getting back in touch. I stayed in Japan for 10 years, traveled through Asia, Africa, and Europe and eventually began teaching in the US, doing summers in China and Indonesia. I’m sure readers will find Asian cultures as fascinating as I do if they get a chance to read about them!

Claire: In your books, the protagonist Sara lives in the USA and has dual Chinese and Scottish heritage while Sanjeev is Indian-American. How important was it to have protagonists of colour and as two white writers, how do you ensure your portrayal of those characters is authentic?

David: Scott and I consider authenticity very important and take great care in how we represent others and make every effort to take into account their cultural heritages, gender, age. Not only do we draw upon our own experiences in these cultures, but we do extensive research as well.

Scott: I wouldn’t pretend that our portrayals are anything other than fictional accounts, and that Sanjeev, Sara, and Salma are fictional characters drawn from groups of people whose lives and experiences may be very different to our own. As such, it is quite possible that we have made errors – omissions, assumptions, generalisations. I think we should hold up our hands and acknowledge that. But – and it’s an important but – I also feel a work of fiction should not be constrained by the fear that mistakes will be made. Our characters are (fictional) human beings. We may not get everything right about their lives, but I hope a generous reader will forgive our trespasses and acknowledge the great, even inspirational, qualities Sara, Sanjeev, and Salma have. Finally, I should also add that it was very useful having someone like Archna, our publisher, and Shabnam, my wife, there to guide us.

Claire The Three Hares Trilogy takes us back in time and draws on Chinese mythology and the Silk Road. Have you always been interested in history? Did you have to do a lot of research to ensure that the factual elements of the story were accurate?

Scott: A fair bit of research was required, yes. Both David and I have doctorates, so we are used to doing some research. Having said that, we aren’t infallible (obviously) and we are both working full-time, so it’s not always easy to find the time or energy to delve as deeply or as frequently into the various historical periods as one would like. As for me, history has been an interest since I took first and second-year courses in British Medieval History and European History at university. Sadly, there were no World History courses taught at the university I attended in those days.

David: The history of the Silk Road is utterly captivating, and the more I’ve researched it, the more I want to know about it. The way it brought together diverse cultures, how religions, technologies, and languages were transmitted, how peoples had to make sense of other belief systems and values … truly fascinating. The mysterious image of the Three Hares themselves and its appearance along the Silk Road added to my curiosity.

Claire: I was interested to read in one of your blog posts that you had created some teaching resources to accompany The Jade Dragonball. Could you explain a bit about those. Do you plan to create some resources for The Gold Monkey Key as well?

Scott: The teachers’ guide is also on the Neemtree Press website. Basically, what we’ve tried to do is create a compendium of useful sites and ally these with factual and opinion-based questions about each chapter so that teachers or homeschoolers have ready-made activities and ideas to access about the book. If there is demand for a teachers’ guide to the Gold Monkey Key, we’d certainly consider doing one for it too.

David: We created teaching resources to complement the book for use both in classrooms and for the interested reader. It expands upon the themes and historical contexts present in the text and makes it easy for teachers to integrate the book into their curricula. We are planning to make teacher resources available for the subsequent books in the trilogy if they are being used in classes.

Claire: Speaking more generally, how did the partnership of writing a story together come together? I believe you’re also in different time zones, so how does the process work?

Scott: It’s difficult working across time zones, I have to say, but with Skype, email, and texting, it’s not impossible by any means.

David: Scott and I are fortunate to be writing at a time when information can be shared so readily. Our collaboration has been made possible by email and Skype meetings. Our frequent contact allowed us to generate ideas, hash out details, share resources, and send texts back and forth for revision – despite the fact that we are thousands of miles away from one another. This really never could have happened in the past.

Claire: How long do we have to wait until the final part of the Three Hares and are you able to give us any hints about what is going to happen?

Scott: This month, June 2021, I’m putting the finishing touches to the draft that I will send to Archna. There are quite a few stages that the text will have to go through before it hits the marketplace, but I estimate the book should be available to buy around the beginning of 2022. Book Three is the resolution to the story that began with Sara and the Jade Dragonball. I can’t say too much, but basically the trio have to work together to defeat the one-thousand-year-old Shaman, Shan Wu. There are several great locations including the tomb of the First Emperor near Xi’an, the British Museum, and an ancient battlefield in England, and of course lots of surprising twists…

David: Book Three is nearly finished, and it is really exciting! As you might have guessed, yes, there is a third Hare! Once she has joined the other two, they are ready to gather up their strength,  take what they’ve learned from their adventures and the knowledge they’ve gained from the Eight Immortals, and tackle the powerful and evil forces threatening both worlds. It’s a racing adventure that ties together the trilogy and brings it to a close …

Claire: Are you working on anything else that you can tell us about?

Scott: I’ve just finished the first book in another, separate trilogy that is aimed at YA readers. It’s a little hard to categorise: a sci-fi adventure that has elements of satire is probably the best way I could describe it.

David: Scott and I have discussed where this might take us, and a few ideas have popped. We’ll see.  Both of us are busy writing other books as well, so you may hear about those, too!

You can buy The Jade Dragonball and the Gold Monkey Key on bookshop.org or support my local bookshops Five Leaves in Nottingham or Bearded Badger in Belper.

View all posts by Claire Storey